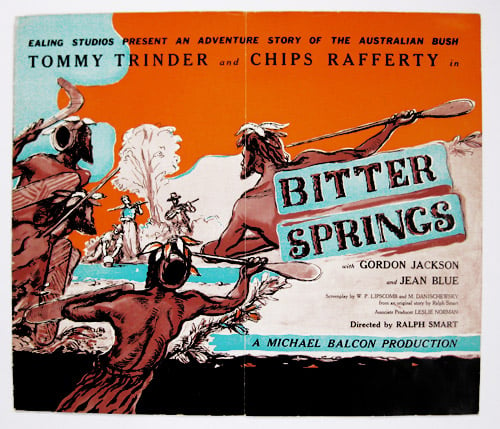 Original English pressbook produced to promote the movie’s London release on 6 July 1950. 'Bitter Springs' was shot in the Flinders Ranges SA between May and November 1949 and is concerned with the tensions that arise after the King family purchase 600 acres of Aboriginal tribal land from the South Australian Government to establish a sheep station. The movie was the first serious treatment of Aboriginal Land Rights in an Australian feature with Ransom, a trooper (Michael Pate) setting out his options to Wally King (Chips Rafferty), see above. The resolution of the movie is well removed from the climate of the time – “But in the end the white man’s magic prevails: not the magic of the gun, but that other magic, the magic of compromise, of finding a way to give both sides a chance of living side by side without violence”, according to the pressbook– and carries the deep racism and assumed superiority of white Australians towards Aboriginal people. The booklet contains examples of posters and advertisements to be used overseas, synopses in French and German, “the story in ten pictures” or images plus summary, biographies of the actors, director and producer, and anecdotes from the shooting.

Other books by Smart, Ralph Portraits of the British Cinema From Quarantine to Q Station

Viera, Dannielle and others